Each year the NGPA hosts the NGPA Industry Expo, which is the second-largest pilot recruiting and aviation networking event in the U.S. The event features keynote speakers, hundreds of ATP-qualified active airline pilots seeking employment, aviation products and services, and educational seminars for both commercial, business/corporate, and general aviation pilots. 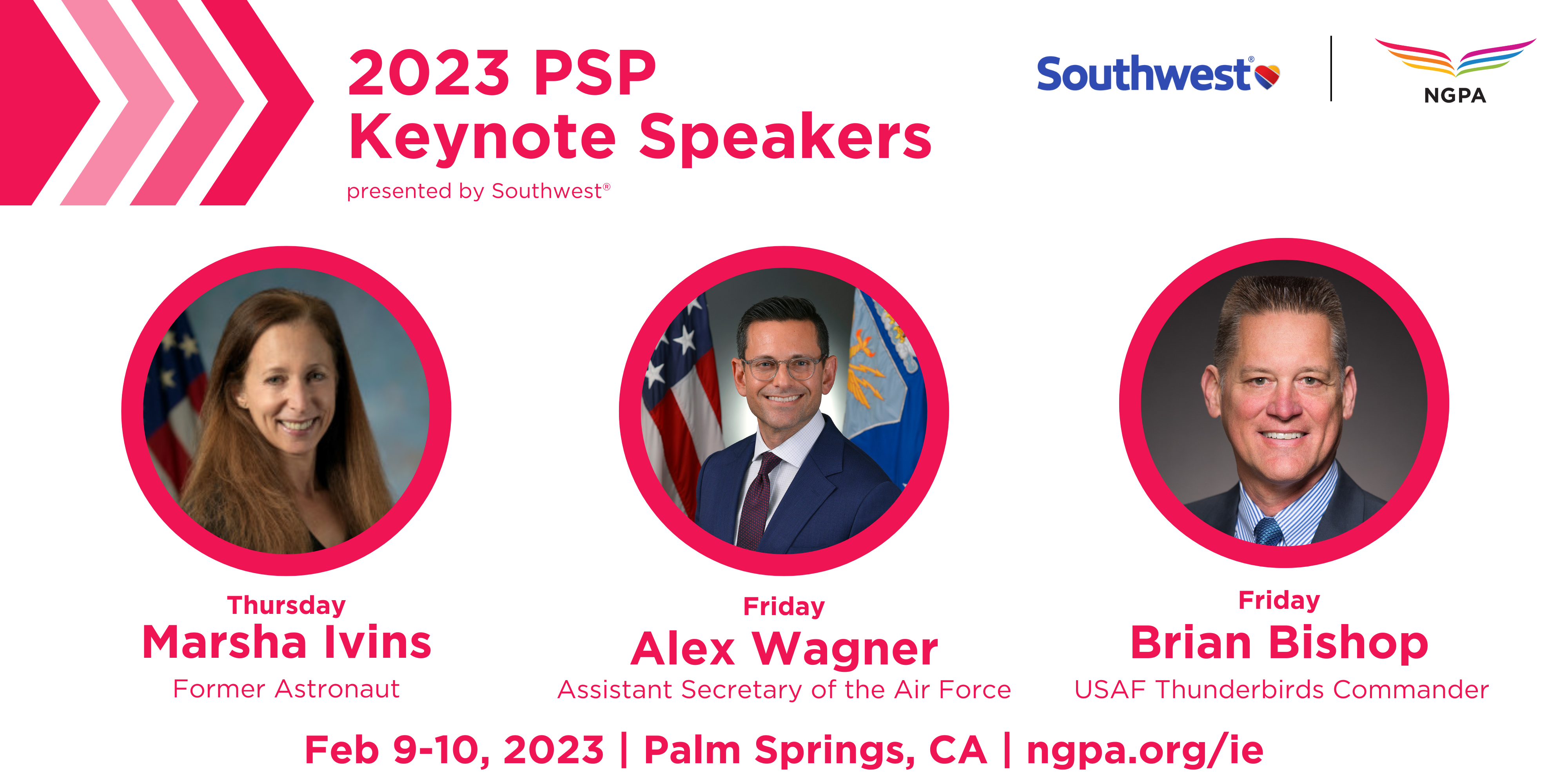 Thursday - 2:00PM - Keynote Speaker - Marsha Ivins
presented by Southwest Airlines
Marsha Ivins, a former astronaut and veteran of five Space Shuttle missions at NASA, will speak about the science behind human spaceflight, her aviation background, and Space Shuttle aerodynamics.
Former astronaut and veteran of five space shuttle missions. In 2010 Marsha Ivins retired from NASA after a 37 year career as an engineer and astronaut. After graduating from the University of Colorado with a BS in Aerospace Engineering, Marsha began her employment with the Lyndon B. Johnson Space Center in Houston, TX in 1974, working in human factors and man-machine engineering on the development of Orbiter cockpit layout, displays and controls, and the Head-Up Display. In 1980 Marsha was assigned as a flight engineer on the Shuttle Training Aircraft and as a pilot on the NASA administrative aircraft. She holds a multi-engine Airline Transport Pilot License with Gulfstream-1 type rating, single engine airplane, land, sea, and glider commercial licenses, and airplane, instrument, and glider flight instructor ratings. She has logged over 7000 hours in civilian and NASA aircraft. Marsha was selected as an astronaut in the class of 1984 as a Mission Specialist. A veteran of five space flights, she has logged over 1,318 hours in space.

Friday - 10:00 - Keynote Speaker - Brian Bishop
presented by Southwest Airlines
Presentation: USAF "Thunderbirds," A Peak Under the Tent
Brian T. Bishop, Major General, USAF (retired) is a highly respected speaker and motivator on high-performance teams.  He uses his real-world experience from his 32-year United States Air Force career through storytelling to guide the audience on a journey through high-performance team building.  Brian truly believes that everyone wants to be on a winning team and that every team, with the right leadership, resources and motivation has the potential to not just increase performance but also to change the world.   A graduate of the United States Air Force, Brian was the Commander / Leader of the USAF Air Demonstration Squadron, “Thunderbirds,” and was an installation commander (mayor) at two different bases—one in the Republic of Korea and one in Iraq.   He led teams of highly complex organizations ranging in size from 10 to 30,000.  Brian has served at all levels of the military to include Office of the Secretary of the Air Force Legislative Liaison, Headquarters Air Combat Command, United States Forces Korea and United Nations Command, Carl A. Spaatz Center for Officer Education and Commandant Air War College, and U. S. Military Training Mission in Riyadh, Kingdom of Saudi Arabia among others.  Currently, Brian is the President of Brian T. Bishop & Associates, LLC where he consults with companies and speaks on leadership and high-performance team building.

Friday - 1:30PM - Washington Update: Inside the Pentagon with the Air Force's Head of Personnel and Talent presented by Southwest Airlines– Go inside the Pentagon's storied "E-Ring" for a fireside chat focused on one the nation's largest employer's talent attraction and development efforts, including recent initiatives to build a more lethal force though diversity and inclusion.  This conversation between the former General Counsel and Chief Legal Officer of the Air Force, Gordon Tanner, and current Assistant Secretary for Manpower and Reserve Affairs, Alex Wagner, will transport you around the globe, from why Ukraine matters to preparing for conflict with China.  While taking you to a cruising altitude, they’ll cover the full spectrum of issues from progress on LGBTQ equality in the military, opportunities to join the Air Force, and policy changes that impact currently serving airline pilots in the Air National Guard and Reserves.  Not to be missed: a check in on the Space Force ... and yes, it's real.

The Honorable Alex Wagner was confirmed by the U.S. Senate on June 7, 2022, and sworn in as Assistant Secretary of the Air Force on June 10, 2022. As the Assistant Secretary of the Air Force for Manpower and Reserve Affairs, he provides overall supervision for matters related to manpower, military and civilian personnel, Reserve component affairs and readiness support for the nearly 700,000 Airmen and Guardians in both the U.S. Air Force and the U.S. Space Force. Mr. Wagner’s career includes significant experience in national security, law, and private industry. Prior to his appointment, Mr. Wagner served as Vice President for Strategic Initiatives at the Aerospace Industries Association, leading efforts focused on talent development in the aerospace and defense industry, including specific programs to enhance workforce diversity, expand STEM education access, and protect employees’ health and safety during the COVID-19 pandemic. He has also worked as a lawyer in private practice, specializing in intellectual property law and the First Amendment .Additionally, he served in various positions in the Department of Defense during the Obama-Biden administration. In 2015, Mr. Wagner was appointed Chief of Staff to the Secretary of the Army, shaping policy and outreach for the Secretary while aligning the Army’s civilian and military leadership with the Secretary’s priorities, initiatives, and plans. In this role, he was closely involved in developing and implementing policies opening all combat roles to women, enabling transgender Americans to openly serve their nation, and updating the Army’s uniform and grooming regulations to enhance recruiting and retention of soldiers of faith. In previous appointments in the Office of the Secretary of Defense, he represented DoD equities to the interagency and internationally on issues regarding human rights and the laws of war, strategic and conventional arms control, and nuclear non-proliferation.

Joining HON Wagner in a fireside chat is the Honorable Gordon Tanner. Mr. Tanner is the former General Counsel for the U.S. Air Force. In this role, he provides oversight, guidance and direction for legal advice provided by more than 2,600 Department of the Air Force military and civilian lawyers worldwide. In his prior private practice, Mr. Tanner was a Senior Partner in private practice and is also a retired Colonel in the US Air Force Judge Advocate General Corps Reserves.

Register now for the 2023 Industry Expo or Winter Warm-Up Presented by United Airlines and join us in Palm Springs, CA Feb 9-10, 2023 to hear from our keynote speakers.